An Evening At The Hope & Anchor

by Ulrich Schnauss, Nature Of Wires, The Rude Awakening, 1i2c 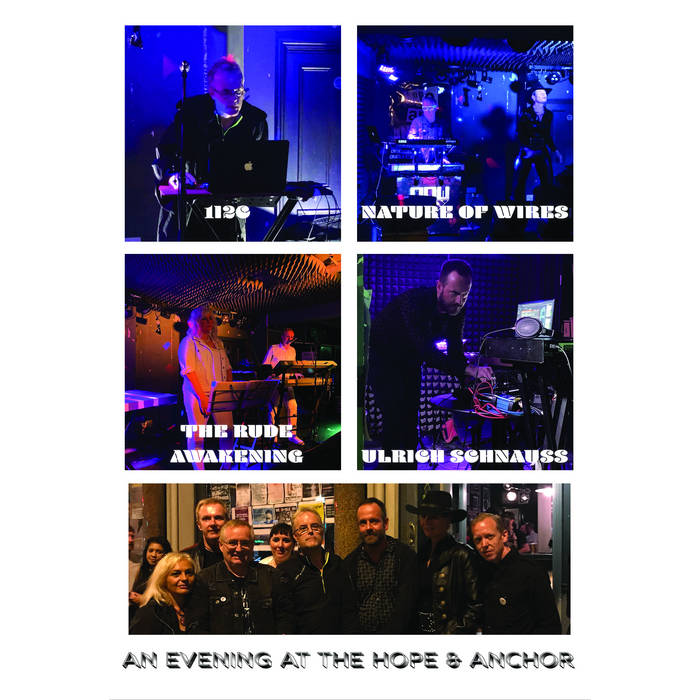 We present our new live 3 disc CD set: An Evening At The Hope & Anchor by Ulrich Schnauss, Nature Of Wires, The Rude Awakening & 1i2c.

Recorded live at a very special show at The Hope & Anchor in Islington, London on 27th July, 2019.

Nature Of Wires perform songs from their catalogue and recent tours across Europe and the UK.

Disc 2 is the full set by ‘sleazy’ SynthPop duo The Rude Awakening.

They play their debut album Kaleidoscope in full – all 12 songs. This was a highlight of their 2019 UK shows.

Disc 3 is Ulrich Schnauss’s full set of a track titled Sanguine that was created live on the night.

Having Ulrich play at this show was a coup for everyone involved and his talent is shown perfectly on this disc.

All recordings were made on the night by Sound Engineer Richard Sherriff.

The 3 discs are housed in a standard DVD style case along with artwork that shows all four acts performing on the night and some words from show organiser 1i2c.

All acts except for Ulrich Schnauss are UK based musicians who are working hard to create the best possible music and live experiences.

All discs are full un-edited recordings including all audience reactions and inter-song banter. Performed in front of a small audience who loved every minute as can be heard.

“A seductively saucy set from The Rude Awakening at Hope and Anchor on Saturday night.”

at Hope and Anchor on Saturday night.

t was a real delight to have a clear view of such a sonic craftsman at work, whilst

being immersed in the epic musical journey he was creating.

Thanks John for organising, and thanks to Derek for the tip-off (I was planning to go anyway,

but the possibility of Schnauss playing certainly sealed the deal).” – Matt Brock

“I’d never set up or organised an event before.I had never been on stage before either.

Within a few months I was not only producing my own music, but taken on the role of managing an

had both encouraged me to get up on stage.

Awakening’ & ‘Nature of Wires’ to join us.

It truly was a great line-up and the ‘Hope & Anchor’ is one of the ‘the’ venues to attend in London!

I wanted also for the other bands to meet each other and network.

Sadly, with around a week to go, ‘IAMWARFACE’ had to cancel. It was a bit of a shock, but staying

cool and taking advice, I asked a handful of bands and artists if they could help.

What a massive surprise and shock when Ulrich Schnauss had time and committed.

The night happened and is behind us now, but we all had massive fun and

all the music was recorded.

I think you’ll strongly detect the mood, the ambience & the party

Electronic Music for all music lovers. Proudly independent as a label since 2010

Bandcamp Daily  your guide to the world of Bandcamp

Benji B talks about his new compilation ‘Deviation Classics’